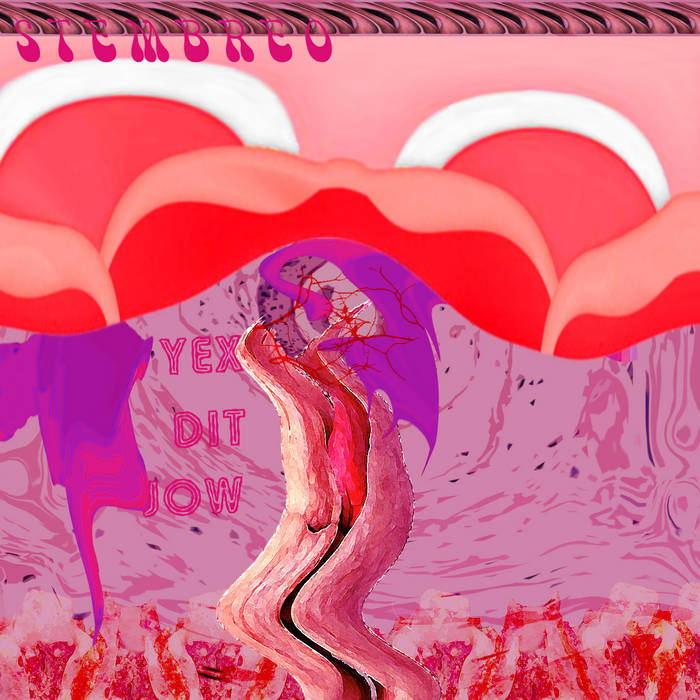 'The album
is a track-by-track palindrome; after the 10th, and
originally last track, I duplicated the 'songs' in
reverse order under different titles, just as pretentious as
the idea to do so (originally, it was longer than an EP, but
still not as long as I feel a full-length should be).
The album
is made of nothing but vocal sounds for the raw audio,
ranging from sound poetry to dialogue. I tried to focus on
deconstructing the phonetics and isolating the moments of
speech impediment/studdering on some of the samples used.'

How would you describe your music?

Musical debris amidst cinema for the ears. Sound with moving wounds. Rorschach tests for the blind. Audio flotsam and jetsam. Aural sex.


What is your favorite smell associated with any sound?

The smell of cotton following popping open the lid of an aspirin bottle.

The smell of rotten milk following the popping of a lid off a jug.


What aspects of your physical environment influence your music?

Banal and conservative surroundings and work life constantly keep me with one foot in the ether, escaping creatively. Learning to squeeze blood out of a turnip i feel is a honed aspect of the cutup technique, and a tool of awareness.


What is the color of your favorite drug (liquid including)?


What is your favorite phobia and philia (not necessarily affecting you)?

Phobiaphilia and Philiaphobia. Fears and fetishes seem interchangeable. Society as a whole sadomasochistic game reflects this. Love and fear sprout from the loins.


Are there any films or soundtracks that have helped shape your music?

the entirety of the film "Berberian Sound Studio", the concept behind "LFO", the visual deprivation of Derek Jarman's "Blue", "Eraserhead" (obvious), the aural paranoia in "The Conversation" (1974). The sound design of Tarkovsky's Stalker, THX 1138, Fellini's 81/2 . . .


What is your favorite piece of musical equipment?

My makeshift drum set made out of garbage and found objects.


What is your favorite generic response you've received as feedback on your music?


How long have you been creating music and playing certain instruments, and how has it evolved in your eyes/ears? Any side projects that have helped, or are continuing to, shape your creating process?

I've played guitar and keyboards, self-taught, for about 15 years now. I fronted on vocals the Arizonan industrial band Synikal as a teenager. Psychedelic rock and later, the more experimental punk rock was a gateway into everything musically I am now; groups like Flipper, Saccharine Trust and Spike in Vain. Now, free jazz and improvisational noise is key in approach.


Any memorable 'musical accidents', either performing or immortalized on a recording?

Most memorable was creating silence by overlapping duplicate tracks with retrograde inversions on both in middle stereo on my audio editor without knowing what I was doing.
Most of Stembreo's music are so-called accidents to a certain degree.
"How random is random?"- William Burroughs.


Any reading material, fiction or otherwise, that has helped shape your music you would recommend?


What is your favorite and least favorite sound produced by non-traditional means or instrumentation?