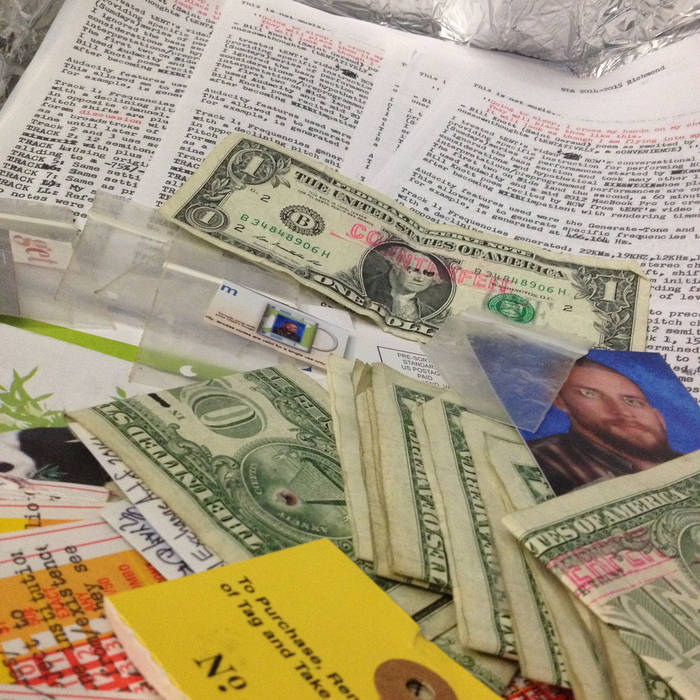 You will get a DOWNLOAD LINK as a bonus item when you purchase.

In addition to a general listening guide the notes following this introduction are to be treated as audio notation and approached as building instructions, or a recipe for the (re)creation of what was, in its first manifestation, mostly an improvisational performance exploring concepts revealed to me by Richard Cameron-Wolfe in tENTATIVELY, a cONVENIENCE’s YouTube video “Richard Cameron-Wolf re Franz Camin” discussing his first composition for one of Franz Kamin’s Sunday Fiasco performances. I used Audacity (as well as a youtube audio ripper website for the RCW voice sample) on a mid-2012 MacBook Pro in the creation of this body of work. I found it particularly liberating to treat RCW’s spoken word as recorded by tENT as its own variety of audio notation as it includes all the information necessary to recreate his first FIASCO composition. John Cage’s Notations is an illuminating reference for the robust and idiosyncratic evolution of notation by contemporary composers and it certainly had a role in empowering me to approach the creation of audio and notation as one and the same.

tENT’s video can be found here under user, onesownthoughts: www.youtube.com/watch?v=IqxF79zenLA

I circulated approximately 20 c-122’s wrapped in foil to various folks in the United States and one in Sweden. Having been a regular mailer of ephemera to Illuminated paths it seemed fitting to ship one their way and I was pleasantly surprised at IP having interest in doing a release of the material. Due my creative haste and absorption in recording directly to tape only a handful of digital files were saved so it became time to put my notes to the test and recreate Side A. This was a taxing, lengthy, and valuable experience that ultimately allowed me to further refine the integrity of the audio/notation. I’m very pleased with this collection.

The majority of my creating these files can be viewed in the 40 minute compression of more than 8 hours of footage here: www.youtube.com/watch?v=TolGngVPXLY
This video too, was used to further refine the notes and catch mistakes. Many more subsequent hours of fine tuning were not captured on video as such the aforementioned video is for context and not exactly representative of the exact audio here.

Compressing tracks to mono and viewing as a spectrogram (Sonic Visualizer for Mac is sufficient) can provide onsite as to how the stereo channels coalesce in physical space.

This audio is not intended for headphone listening.

Frequency figures gathered from a forum within arstechnica.com where users discussed the frequency range of cassette tapes. Obviously, there is a variety of discrepancy due to a variety of variables during recording and playback; however, the above is accurate to the digital file creation and is what was fed through the equipment for recording.

Originally intended as a broad brushstroke loaded with the entire spectrum of capable audio for the sake of output and recording leveling with only sustained frequencies; however, I couldn’t resist exploring the fringe sliding pitch shifts.
Half second fade in and 5 second studio fade out applied (approx.). Fade ins and outs will be applied to subsequent tracks in a similar fashion, unless otherwise noted.

10:45
My second exploration attempt at RCW’s vocal composing of his first Fiasco piece for Franz.

1:46
Referred to as Wed303 for my own file naming though it is an untitled piece. No notes were made as I had exhausted my own patience and did not want to impede the creative process; however a video of its creation can be found all the information extracted here: www.youtube.com/watch?v=2gfqvEZz1nE&feature=youtu.be

4:44
First Exploration of RCW vocal notation. Extensive commentary as to the process can be found on sound cloud. soundcloud.com/ryan-broughman/fiasco-composition-for-franz-kamin-after-richard-cameron-wolfe

1:30
left: 19KHZ sustained This may not record properly. Turn Dolby off when recording/duplicating (tape fidelity is also of concern). This may be a silent track on some setups even if recorded properly.

1:30
centered: 18KHZ sustained and 18KHZ declining 12 semitones
A great many variables affect the experience of this track including the age of the listener (many adults may be physically incapable of hearing these frequencies thinking the track is silent while younger adults/teens/pre will clearly hear it). Equipment and/or settings (leveling, EQ, Dolby/anti-hiss etc) used in recording or duplicating cassette (including type of cassettes) and, ultimately the equipment/settings of the playing of the cassette will affect experience. In all cases I recommend using track 1 as reference in leveling, turning Dolby or any anti-hiss filters off, and at least a mid-high volume output. NO HEADPHONES unless satisfying your curiosity after listening without headphones.

First release/recording this was recorded mono by mistake and kept for the sake of listening context and consideration. The effect, when pumped out as a mono track, I speculate, may be occurring either as a matter of physical limitation in handling the frequency dissonance thus mimicking the “beats” as RCW calls them in a physical stuttering of handling the frequencies OR the phenomenon is emanating from the speaker cone itself. This also will vary significantly from various equipment combinations and/or setups. My reference cassette deck is an old JCPENNY portable that playback in mono and the “beats” still occur; however, are obviously much different to experience than with even small stereo laptop speakers.

1:30
Same Frequencies as in Track 15; though, split with 18KHZ sustained in left and a 12 semitone decline of 18KHZ in right. Same silence concerns as mentioned previously.

1:30
Using track 16’s file I applied a sliding pitch decline of 12 semitones to the left channel and again to the right channel.

short fade in and out applied

All waveforms, square (no alias).

Same as previous with channels switched

Short fade in and out applied.

Same as previous track with -75 initial tempo change and no pitch change applied.
Short fade in and out applied.


Please send tapes, ephemera, champagne, letters, or other items of interest to:

I try to reply to anyone who writes.
ryanbroughman@icloud.com