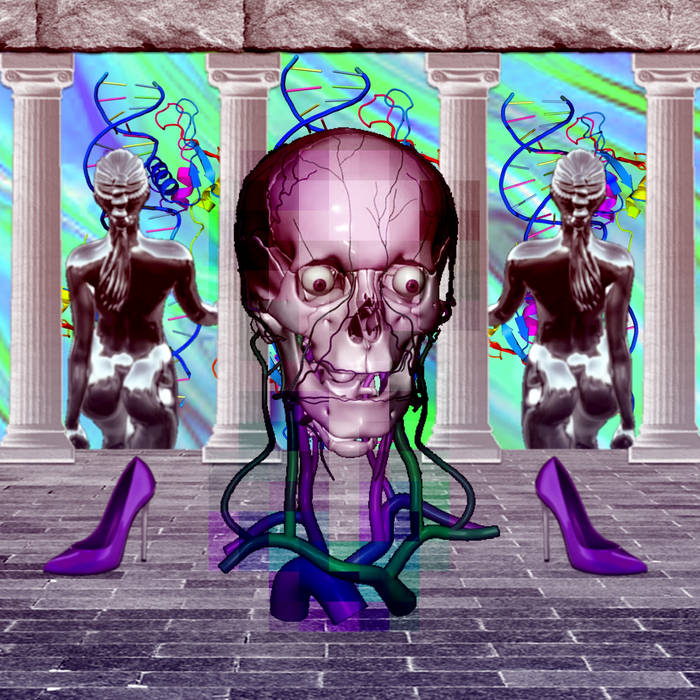 A Sci-Fi concept rap album by O.S. CLONE aka O.S. CLAN. This is the second installment of ＥＣＣＯＪＯＩＮＴＳ.

Listeners follow the character XYz who successfully escaped destitution in Minneapolis during the late 80s. Due to the pressures of illegitimate achievement amidst the war on drugs, XYz works their way up as a petty cyber criminal aiding in the concealment of popular Celebrities turning to various forms of crimes, whether enacted out of discrete, material motivation or simply, plain hubris. With the rise of genetic engineering, cloning, and discoveries in biotech, the 90s shapes into a playground for Bio Crime, a new competing field of organized crime emerges, exploiting these advancements to secure a share of the capital shadow pie once dominated by drug lords, white collar criminals, and other high-tier operations. XYz attends a renowned American Football player's pool party to celebrate the dawn of life span extension made possible by emergent Organized Bio Crime. Little does XYz know that in the course of this pool party, they will become a time traveling corpus for a prolific trafficker who intends on living a second life to serve the darker demands of high profile celebrities in cladensence, as the 21st century creeps in.

In the distant future-past, the maximum accumulation of profits by shadow corporations required financial instruments more deceptive than an offshore bank account to conceal white-collar criminal activities. Posing as a nonprofit cemetery, biological experiments (ergo illegal embryo cloning) carried out at the time would be stored indefinitely via cryogenic preservation capsules, buried within plots of 501-13 cemeteries.

Due to an increase in violent criminal activity nation-wide, law enforcement standards needed to adjust if the demand for public safety was to be met. Hence, the requirement for literacy and basic critical thinking in police training had been lifted, favoring technologically assisted methods for aiding investigation and enforcement. The absence of literacy among the police force made the utilization of nonprofit company structures advantageous for concealing criminal activities as detection would require in-depth review of corporate documents and paper trails, which now elude the incompetence of police.

Emerging from an unstable cyro-capsule hidden beneath the soft earth of a 501-13 cemetery, an unsuspecting time traveler finds themselves unable to explain the coerced nature of their actions.
A Personal Integrated Memory Protocol installed in the cryo-capsule, deeply embedded a lifetime of experiences into the genes of the time traveler who now finds themselves committing acts of deviance as though a criminal biology guides each action oriented towards a distant practice. However, an uninterrupted memory sequence remains: in the summer of 1993, OJ invited the greatest traffickers of the previous decade for a sultry pool party. A few drinks later, XYz remembers a cadre of lab coats joining the party handing out shimmering blue vials.

All that remains beyond this hazy memory is the toast given by the party's host, encouraging participants to "break free from the limits of our human life spans; a new era of perpetual legacies is upon us--one day our greatest ambitions will guide our successors from within. No longer will a dream, a desire, a goal, be interrupted by the passing of a single life time".

XYz's hedonistic impulses are determined to be the result of a rogue Personal Integrated Memory Protocol influence embedded deep within the genome. Side effects include: driving fast, eating bad food, increased libido, diminished impulse control, emotional suppression, and a desire to hustle. Neural signals sending shockwaves to the adipose tissue, zap away the fat like a Billy Blake Tai Bo exercise program, replacing an atrophied disposition with a Herculean physique. With substantive gains merely an illusion, XYz finds there is little real strength in this form; sleeping through weekends, mornings appearing meaningless, alone, rolling zags--will no one listen?

For what it's worth, the ghost within XYz's genes is a marvel of 20th century science. By cloning Personal Integrated Memory Protocols, detecting any tampering with these devices is made null at the level of direct observation. The intended purpose of the device is to reprogram the recollection of memories by host bodies in the process of transferring a foreign conscience to a new flesh vessel. A trafficker who is unknown and unnamed, successfully embedded themselves in XYz's genes through the exploitation of a 501C-13 criminal operation utilizing cryo-capsules buried beneath cemetary earth to store illegal biological experiments worth millions to their investors. One experiment appeared to be the perfect opportunity to extend the lifespan of this prolific trafficker whose old age would be circumvented with P.I.M.P. technology and genetics. Substituting the integrated memory protocol of a body in cryo-presevervation, the trafficker made sure there would be reborn in a new body. Crime is odd in this way.

Diamonds are a girl's best friend--and mad scientist's. The shape memory energy storage of specific crystal lattices within an appropriately synthesized diamond, makes possible the preservation of a Personal Integrated Memory Protocol. It has been known for over a decade that lab diamonds are nearly indistinguishable from naturally occurring geological specimens. Due to the illegal nature of P.I.M.P. technology, lab diamonds emerged as the perfect method to conceal a critical element of human conscience suppression which ultimately aids the transplantation of one mind into a new host body.

XYz discovers several diamonds embedded in the upper vertebrae of their neck after a run-in with the police turns into critical hospitalization. MRI scans revealed these embedded stones within the bone, but in turn, also magnetically disrupted the storage of the P.I.M.P. within, unleashing their once suppressed conscience.

The eventual uncovery of 501C-13 schemes was made possible by competing criminal enterprises. Discovery by organized financial criminal syndicates prompted the conversion of shell company tactics into new sources of private funding for law enforcement, albeit corrupt though necessary at the time for public safety. Armed with new training (aided by strong Public Affairs campaigns) to reinvigorate investigative capacity, police became adept, and motivated by criminal corruption to locate the scientific crime empires built upon the P.I.M.P. technology.

King Pins extending their temporal reach via P.I.M.P. and genetic engineering become targets for criminal operations threatened by their longevity. Utilizing law enforcement as a game piece, Lab Crime is predated upon by Financial Crime in a competition to secure the maximum potential of their efforts. Our involuntary time traveler, XYz, is eventually intercepted by the Ops via correct identification as the vessel for a high profile trafficker who purportedly passed away several years ago. Unaware of this intent, XYz is captured, thus freeing up opportunities in organized crime.

Ironically, XYz's genetic memory never assembles completely, and both their own purpose of existence and the parasitic consciences' existence remains in a limbo, locked up in a new Prisonwave which emerges from the events.

Special Thanks to ₳§ᗐM̶R̳ for helping with the art concept!